The day started out as partly cloudy with a blustery wind up to about 15mph. At 6:30am, the sun was well up, and 45 minutes it both cleared the trees and was to start a morning-long experience with the little planet Mercury crossing its face. Those 45 minutes came and went, and the clouds stayed until about 10am, when things started to clear out. We even had a few strong rain showers, associated with the looming cumulonimbus clouds that were rolling by. The wind picked up, the skies cleared, and the sun came out to play!

We had two telescopes in operation. The newest, the 16″ SCT in the Kurtz Dome was operating with a newly constructed solar filter: Baader solar film and cereal boxes combined with hot melt glue and duct tape. This makes for an excellent off-aperture 6″ screen for the monster scope. The other was our Heliostat which has an inverted Byers fork mount that moves a primary flat mirror to reflect sunlight onto the secondary and then into a 6″ refractor waiting through a hole in the Chart House wall in the library. We had some excellent views and enjoyed visitors from NH and MA as well as several astronomy classes and some members of the astronomy club. 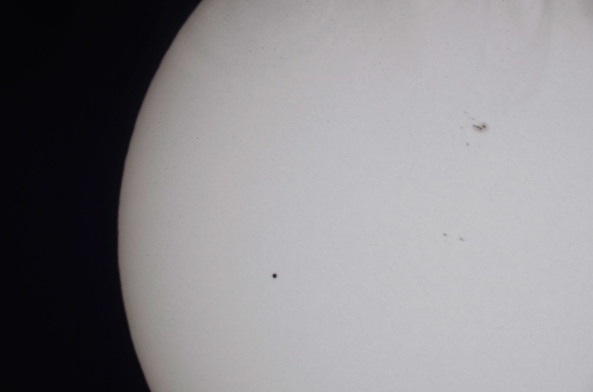 9 May Transit of Mercury seen through the 16″ SCT. A Nikon D7000 was used to snap this image which shows the small round dot of Mercury along with two sunspot groups. 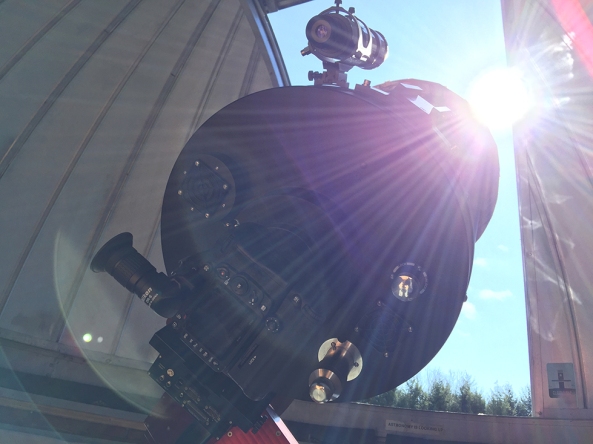 The working end of the 16″ SCT with the D7000 attached for prime focus work.

The heliostat in use. This is also a unique selfie opportunity.